What started as a year-long project, quickly became a life-long endeavour.  Read the blog below.

Educational, inspirational, and entertaining. It explores the concept of consumerism, convenience, disposability, and going without.

Donate now or Watch the trailer

“So I thought I was going to see a film with a bunch of hippies running around making me feel bad…but I was so wrong.  You guys did a really good job.” Erin MacDougall, Teacher.

“You guys did a really good job of incorporating all the stories and making plastic-free seem doable. Loved the animation as well.  People are dying for entertaining films that offer solutions.” Jen Rustemeyer, Clean Bin Project, Just Eat It.

Sorry for posting here- once I organize the film site better I won’t anymore.

I am showing From the Waste Up tonight April 27th in Portland at the Clinton as part of the extended Portland Women’s Film Festival. http://powfest.com/2015-reel-feminism-series/from-the-waste-up/

It is also showing in Berkeley paired with a talk by Beth Terry.  http://www.transitionberkeley.com/

That’s all for now.  Apart from this.  I received three pairs of baby socks with this amount of trash.

That is, each sock individually modeled by a crazy plastic foot. A marvel of stupidity.

These little feet want to walk an Earth free of plastic.  Hooray!

I recently wrote about some troubling news that dairy products have been found to have plastic chemicals from the processing stage.  Milk, for example, starts it’s contamination journey straight out of the teat, as it enters a soft plastic tube.  The higher the fat content, the more the plastic.  For someone who thought she was avoiding plastic chemicals (including, in vain, buying milk in glass bottles), I was disturbed and made a promise to cut back on dairy.

So I got into making my own milks in a big way and I am here to tell you that it is your day to do so,  if you haven’t already.

Here is how easy it is!  And I’m not going to post a picture of my boob here.

Get a nut milk bag.

Get some nuts, seeds, oats, rice and/or the like.  Decide on your sweetener if any. Put chosen items in blender with water.  Press button.  Drain milk through bag.

Based on some experimentation, so far I like an almond-hemp seed combo milk, with a few dates and a touch of maple syrup. 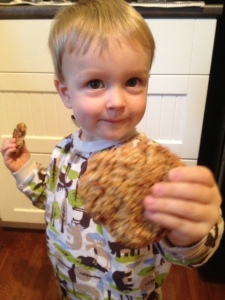 “Hey John is going to give us all their Lego.  It’s like a thousand dollars worth of pieces.”

Oh no.  Say it ain’t so.  My mind fills with plastic pieces and my feet cringe on anticipation of a midnight trip to the washroom.  But is it too good to pass up?  My son would love them.. Yet we’ve done so well keeping the plastic toys out for over two years!

The Lego arrives.  Our house is an ocean. My son is a current. Cubes of oil + chemicals start dispersing from the mass gyre uglifying the living room.  Beheaded men, parts of a ship that will never again be, and a chocking hazard of a cat devoid of facial features. Party’s over. I’m ready to sell the pile three minutes in.

Completely by coincidence we inherit a small set of wooden Lego on the same day.

At 60 cents a piece we barely want our son to touch them, but today I found him quietly building..quite proud of the final product.

It wasn’t a racing car with flames or a rocket ship with astronauts with swords, or a monster that turns into a machine gun. Or a faceless cat.  It was beautiful.

Hi folks. There is a screening of the film in Vancouver this Friday. Please follow this link:

For those of you who have been asking when you can see it in other places, it’s coming. I promise. If you want to host a screening though, we are ready for that. Just get in touch.

Back to you shortly.

I´ve been losing some sleep over this.

I go through great lengths to buy unpackaged or at least non-plastic packaged food.  This thing is about reducing waste, but just as much about health, if not more so now that I have a child.

A simple example, if you will, to illustrate the stuff of my nightmares.

My baby packs down an enormous amount of food, so we start the day with some healthy oatmeal.  Oats bought organic and in bulk. To cook oats one needs water and or milk.  I wouldn´t touch bottled water with a ten-foot pole, so it´s tap.  The milk I have purchased also organic and in glass.  Throw on some organic blueberries picked last summer and frozen in jars and voila. One would imagine this kids got it good.

Depending on where you live and what kinds of pipes your water comes from, plastic chemicals can be in your tap water.  I`ve lived in newer buildings where you can taste and smell the plastic in the water from the new plastic pipes.  There´s a big deal going on in Finland right now where they found a number of plastic chemicals in tap water where these new plastic pipes were used…including 2 UNKNOWN chemicals!!   Or, in other cases BPA based epoxy resins are also used to coat metal water piping.

The milk.  New studies have shown that plastic chemicals are found in everyday foods such as milk and other cream-based dairy products, poultry, cooking oils and other common foods. A large percentage comes from the packaging, so I have that covered.  But poo on me, estrogen-mimicking plastic chemicals also enter the food during processing.   Here is a disturbing excerpt from an Environmental Working Group post:

The study, by Sheela Sathyanarayana and colleagues at the University of Washington, concluded that “phthalates can migrate into food from plasticized [polyvinyl chloride] materials such as tubing typically used in the milking process, lid gaskets, food-packaging films, gloves used in the preparation of foods, and conveyor belts.”  The scientists found that dairy products were particularly likely to become contaminated with phthalates during pasteurization and packaging.

Read the post if you are so inclined.  There are many interesting things there.

So at this point, my baby is happily chucking porridge all over the walls, and I am starting to think that the wall might be a better place for it than his mouth, since many of the chemicals possibly swimming in there have been banned in children´s toys due to their association with “reduced male fertility and reproductive birth defects. Numerous research studies have also linked phthalates to endometriosis in women, increases in waist size and body mass index and brain and behavior changes in infants and children.” says the EWG.  I need to sit down and have a beer to process this- organic, from a bottle.  Or maybe not.

One recent study found some of Germany’s bestselling beers contained up to 79 plastic microparticles per litre.  Huh?!  Read on. One now wonders what other beers and beverages are also contaminated, even if bought in glass.

As if my eating rules aren´t complicated enough- and my man is going to roll his eyes now- but here`s my plan and a few tips.